Why Life Is Strange Made Me Cry

It should go without saying that this article is going to be filled with spoilers for Square Enix’s Life is Strange game series. And, before you read more and find out my reasoning, I will also mention that there are spoilers for Legend of Korra and the Kingdom Hearts series.

If you have finished most of or any of these series, you may be able to guess their common theme. If you haven’t, you may want to back out now, because there are a lot of end game/show spoilers ahead… or feel free to be enlightened.

Up to you. But, know you have been warned.


If you are interested in the game, but you haven’t gotten a chance to play it yet, check out the trailer here.

Despite the slow-moving first episode, Life is Strange snowballed into awesomeness so hard that a group of The Writer’s Cohort (and a special guest!) jumped at the chance to talk about it after its completion. You can’t deny the power behind the heartbreaking tale of a young woman trying desperately to save the love of her life from inevitable death against time itself.

Wait. “Love of her life?” What are you talking about, Adam? Max x Warren for life.

First off, gross. Second off, I think you missed the point of the game.

Life is Strange is a romantic tragedy. This isn’t a game about time travel or Max’s super powers or the end of the world or hipster photographers. From the very beginning of the game, it’s very clear; this is Max and Chloe’s story. Their love story.

Players are introduced to Chloe before we even know who she is. And, if you take the time to read Max’s journal, you can learn even more about how Chloe was Max’s childhood best friend and how she’s been meaning to reunite. Immediately, we know that whoever this “Chloe” is, she’s going to be important and whoever that blue haired girl in the bathroom was is going to come into play, too.

But the game continues to reinforce this bond through the narrative again and again, and we start to see the influence that the two girls have upon each other after each episode. Not to mention, that the central theme of every episode revolves around using Max’s rewind powers to keep them together.

Think about it. Every episode revolves around saving Chloe from death.

Episode One, Max saves Chloe from being shot by Nathan in the bathroom. This is where, when, and why she discovers her powers. In the end, she confesses to Chloe (not Warren!) about her abilities.

Episode Two, Chloe can shoot herself and almost gets ran over by a train. Yes, the focal point of the episode revolves around Kate Marsh’s suicide, but Chloe’s life is jeopardized in here, too, as a subtle reminder to pay attention.

Episode Three is all about Max using her time powers to make things better for Chloe. With one of the best cliffhangers of the entire series, this episode totally ramps up the canon, romantic tension between the two girls in addition to including a late night bonding session in the pool and a dare to lock lips.

Episode Four has Max literally making the decision to either kill alternate timeline Chloe or keep her alive despite her suffering. And then, Max reverses time to “make things right” – read: to be with the ‘real timeline’ Chloe. The two make a breakthrough on the Rachel Amber case (something that is really important to Chloe) and, in the final moments, Max witnesses Chloe get shot.

The game finishes strong on the Max-Chloe ship in Episode Five, as the entire episode focuses on the idea of saving Chloe. Time gets really trippy and creepy, including a nightmare section where you are forced to rewind if Warren (okay, and a few other characters) catches you and scenes where Chloe hits on everyone else in Max’s life in front of her. I’ll say it again; Max’s nightmare is Warren chasing her and Chloe hitting on other people.

The section ends where Max treks up a hill that retells Max and Chloe moments throughout the rest of the game.

Did you read that? The final ‘room’ of the final ‘dungeon’ of the game replays all of the big Max and Chloe moments of the previous episodes. 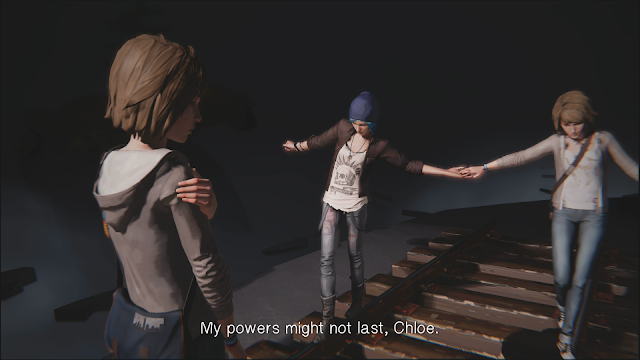 What does this say? Why would the developers do this?

This is the essence of the game. This is what matters. All of these moments add up to something.

This is Max and Chloe’s story.

Once you make it to the top of the ‘hill’ and exit Max’s nightmare, Chloe is there. In a heartfelt realization, she tells Max that she has to make the sacrifice. Because she is alive, the world is going insane and Arcadia Bay sits on the path of destruction.

And then, you must make the ultimate decision. What the entire game has been leading up to. Do you sacrifice Chloe to save Arcadia Bay or do you refuse to lose the one you love and have fought for the entire game?

And yet, despite this incredibly emotional narrative, I didn’t cry while playing the game.

But Adam, the title of the article –

I cried because so many people missed the point.

Look at how many people kissed Warren at the end of Episode Five.

Warren, a character who Max interacts with maybe once per episode, somehow won over the heart of most people’s Max. Warren, who literally contributed nothing to moving the plot forward, other than instructions on how to make a bomb to break into the principal’s office and to give you a picture allowing you to rewind back in time in order to save Chloe. Warren, whose ‘epic beatdown’ on Nathan could’ve been handled by Chloe or Max in a powerful “strong female character” moment or emotional gameplay experience that put us in control of how far to take it, a la The Wolf Among Us.

After going through the entire series, people still couldn’t see the blatant connection between Max and Chloe and chose the bland side character that, unless you consistently choose all the “right” (read: wrong) options, shares no chemistry with Max whatsoever.

Considering the game is still relatively new, I imagine the numbers to change… but the proof is still there.

But how? How can something so obvious to me be such a blinded idea by so many other people?

My answer: Heteronormativity. The idea that people are naturally heterosexual.

Think about it. Despite the obvious pull from the narrative designers for Max and Chloe to be a couple, there is never any mention of “girlfriends” or “dating” vocalized. There’s a text where Chloe jokes about getting married. There are a few flirtatious lines about each other looking good or “Warren being jealous,” but the girls never talk about being completely in love throughout the game. 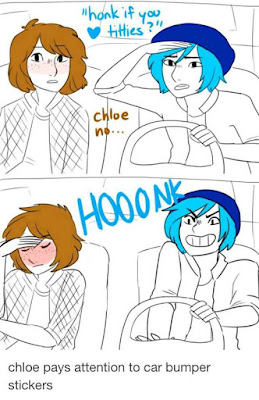 In fact, with such an obvious narrative need for Chloe and Max TO be romantically involved, why would the developers even put in a ‘love triangle’ option with Warren in the first place?

Warren is necessary to keep the illusion of Max being straight. So those who don’t “ship it” are able to deny the true connection with Chloe because of her commitment to “Go Ape” with Warren or the undeserved kiss option at the end of Episode Five.

This is exactly what happened with Legend of Korra. The finale of the show ended with Korra and Asami staring lovingly into each other’s eyes. It’s been officially deemed canon that the two are romantically involved. Yet, they couldn’t say anything officially in the show in order to create that illusion. It’s why Korra had her conversation with Mako at the end that proved they were on good terms and potentially both single.

What if Chloe had been a boy instead?

Max and Cole grew up together. They know each other inside and out. They get into trouble together, joke with each other, flirt with each other, dance together, investigate together, share secrets with each other, sleep together in the same bed… Max discovers her powers to reverse time because she wants to save Cole’s life. And she continues to use her powers – even though they are making the environment go crazy and are possibly killing her – again and again. But in the end, they aren’t officially together.

Now, suddenly, instead of this being a relationship that is “forced on the player,” it somehow would become deemed “canon.”

As a gay writer and game developer, this disheartens me beyond words can express. Gay marriage is legal now across the states. Same-sex relationships are starting to pop up in all forms of entertainment. Transgender issues are starting to be recognized as issues. The LGBTQQIAAN community seems to finally be gaining some recognition, respect, and acceptance…

And yet, so many people find it hard to believe that Max Caulfield was in love with another girl.

That is why Life is Strange made me cry.
By Adam Kuta on November 11, 2015
Email ThisBlogThis!Share to TwitterShare to FacebookShare to Pinterest