Why A Horror-Hating Coward is Tempted To Play Until Dawn

Let’s start with two disclaimers.
First: Although this article focuses on Supermassive Games’ survival horror game, Until Dawn, I haven’t played a second of it.
Second: “The Horror-Hating Coward” mentioned in the article’s title? Yeah, that’s me. I squeeze my eyes shut and cover my ears during horror movie trailers. I couldn’t sleep for about a month after watching the horror “comedy” Cabin In The Woods. (I still refuse to classify it as a comedy in any sense of the word. Sorry, not sorry.) My cowardice is so intense that I even refuse to watch Goosebumps or children’s “scary” stories. It’s bad.

Yet, despite these two facts, here I am, writing about the PS4 title that has been terrifying the fingernails off of players since its release this August.

The screen capture above shows almost everything about Until Dawn that has me pacing in front of the line for the bandwagon. From character growth and fluctuating relationship meters to the incredibly attractive Jordan Fisher (who plays the character Matt), there’s a lot here that just screams my name.

See those blue bars? Yeah. Those change. Depending on the choices that you make during dialogue or action sequences, the characters actually grow and the meters reflect the changes. Based on the level of each stat, different conversation options open up or new situations can arise.

This is nothing new. We’ve seen relationship bars and stats in other RPGs. But, take another look. We’re not looking at Charisma, Strength, Dexterity, or Constitution. No. Instead, the screen lists the character’s personality trait levels. Honest. Romantic. Curious. Brave. These are legit character traits that mean something in an overall character arc!

Why is this important? This proves that Until Dawn’s focus isn’t on combat or cheap jump scares – though, I’m sure there are plenty of those abound. Instead, the main, primary mechanic of the game falls to the character’s reactions and personalities themselves. On the narrative. 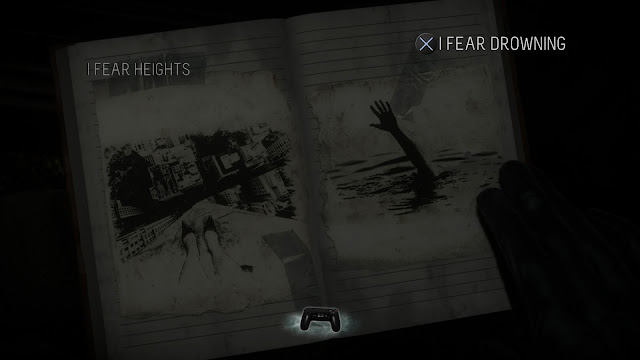 But it doesn’t just stop there. The idea of choice and decision carries out beyond just the character’s reactions. The narrative is driven by the player’s own fears, too! Each section starts with a mini-psych test. Players answer questions revolved around what scares them, who their favorite characters are, or what choice makes them more uncomfortable.

These decisions likely (remember, I haven’t played!) affect the situations that come up during that specific chapter or later into the game. Or, at the very least, they’re meant to put you on edge, waiting for these uncomfortable moments to pop up. The point is, they aren’t asking for no reason! 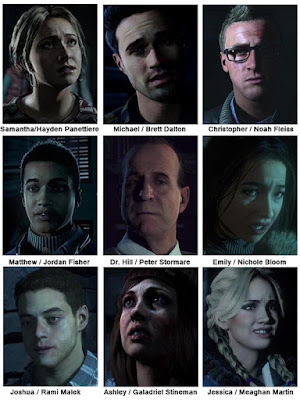 One thing that I also want to point out is the cast of characters. While not the most diverse cast ever, there’s still a lot going on here. I mentioned Jordan Fisher above, but there are some other quality actors who are a part of this title. Jordan Fisher (Teen Beach Movie), Rami Malek (Mr. Robot), Brett Dalton (Agents of S.H.I.E.L.D.), Hayden Panettiere (Heroes, Nashville)…. There is definitely some star quality in this cast.

With this said, I can’t speak for the acting. As I mentioned at the beginning, I haven’t played the game. I’m too afraid of the “survival-horror” classification of it. I mean have you seen the box art? Spooky!

But despite the scares and monsters and potential months of not sleeping, there’s that spark of curiosity in me that’s luring me towards the game. I still haven’t full convinced myself that I’m going to go through with this inkling of interest. But, as a storyteller and choice-based game enthusiast, it’s impossible to deny that this game is subtly calling my name. Which… is kind of creepy.

Have you played Until Dawn? How would you rate it? Does the story overshadow the scary? Let me know your opinions on the game in the comments below! Who knows? You just may be the one to get me onto that wagon.
By Adam Kuta on October 12, 2015
Email ThisBlogThis!Share to TwitterShare to FacebookShare to Pinterest